February is the month for honor­ing Black history in America. Since White history and culture are taken for granted during the other 11 months through the various forms of media, it is important for at least one month of the year to be given over in part to the celebration of those aspects of our history, culture, and peo­ple that have for too long been neglected-namely, the Black experience in America. One of the high historical points of Black history is the life and contribu­tions of Dr. Martin Luther King, Jr. For besides having profound historical im­pact, he was a great lover of human­kind, who taught America and the world the significance and importance of love, especially for those who have been the least recipients of it.

Who was this drum major for justice? What moved him to march to the beat of a different drummer? What was the force in his life that placed him out in front, leading the parade for justice, peace, and righteousness down Main Street, America? Who was this man who became the “conscience” of a nation? What made Dr. King the great lover of mankind that he was? And  where did he learn how to love like that?

The United States now officially celebrates and pays tribute to Martin Luther King, Jr. The focus of this article, however, is not so much on King himself, but on the God whom he served.

Much has been said and written and recorded on film about Martin Luther King, Jr., and on what moved and inspired him to do what he did, not just for Blacks, but for all of humanity, in this country and abroad. He indeed was a world citizen. But at the base of all of King’s actions was his concept of God. It was this more than anything else that made him what he was. What was the God of Martin Luther King like?

First of all, more than anything else, King’s God was a God of love. It was this concept of God that became the dominant force in his life. However, before he arrived at this concept of God and the power of His love, King went through an intellectual and emotional crisis that almost shattered his faith in a God relevant to human need.

While a student at Crozer Theological Seminary, in Chester, Pennsylvania, he read the writings of Friedrich Nietzsche, which contained vehement attacks on Christian ethics. Nietzsche attacked the Christian duty to love all humanity as a glorification of weakness. Confronted with this critique of the value of love for social good, King, while still a student at the seminary, had about concluded that Jesus’ ethical message of “turn the other cheek” and “love your enemies” is effective only in conflicts among individuals, but is not useful in resolving conflicts among racial groups and nations.

Commenting later on this period in his development, King explained that perhaps as a result of his study of Nietzsche’s attack on the Hebraic-Christian ethic of love as a glorification of weakness, he had almost despaired of the power of love for solving social problems. Nietzsche argued that we may define goodness as everything that heightens the feeling of power in humankind, and that we may define as bad whatever is born of weakness.

Nietzsche contended that Christianity was more harmful than any vice since it had been made an ideal of anything that contradicts the instinct of the strong for self-preservation. In the midst of this crisis King heard a sermon on Mahatma Gandhi’s life and philosophy by Mordecai Johnson, president of Howard University. This sermon was so inspirational that he read several books on Gandhi. This reading soon restored his original faith in the power of love, and in the God from whom this love originated. King came to recognize that when love pervades nonviolent methods, far from being a symptom of weakness, it is a potent force for social transformation. Years later, in describing the Montgomery Bus boycott, he explained that Christ had furnished the spirit and the motivation while Gandhi had provided the method. “We will return good for evil,” King said. “We will love our enemies. Christ showed us the way, and Gandhi showed us it could work.”

King, following Gandhi, declared that his nonviolent protests were directed against the forces of evil at work in the unjust systems, not against the persons who were involved in administering the systems. He thus could repeat with Augustine that he hated the sin but loved the sinner. Thus the real struggle was not one of racial tension, but a conflict between justice and injustice.

All of this, of course, went back to God, a God who so hates sin that He will destroy it, but also a God who so loves the sinner that He took his place, identified with his condition, and died in his stead. Such an understanding of God and His method as exemplified in the life of Jesus Christ, and in Gandhi’s methods, led King to consistently condemn violence as immoral. It is immoral because it thrives on hatred rather than love. King in effect reaffirmed that one who injures another injures himself spiritually since he disrupts the harmony within his own soul, whereas the soul of his victim may remain intact. Therefore, King, like Jesus and Gandhi before him, urged his followers to love their enemies. But how do you show love to someone who has turned his dogs loose on you? King declared: “When I say love those who oppose you, I am not speaking of love in a sentimental or affectionate sense. It would be nonsense to urge men to love their oppressors in an affectionate sense. When I refer to love at this point, I mean understanding goodwill.”

God of the Oppressed

King expressed his agreement with Dante that the hottest places in hell are reserved for those who in a time of moral crisis preserve their neutrality. For the church to do nothing, or simply focus on personal piety or private sins, in the midst of social, collective injustice was for King the sin of White Protestantism.

He felt the silence of the churches on issues of social injustice and did not understand their refusal to combat oppression, all the while seeing as their major concern the evangelization of individual souls and condemning of the private evils of intemperance, adultery, and sins of the tongue as immoral (see Matthew 23:23, 24).

King’s God hates evil in all its forms, but shows tender love toward the sinner. He is a God who takes sides and is not neutral. He is a God who is against violence as physical aggression, but also systemic violence that gives rise to bursts of frustrated outrage among its victims.

King’s God was also a God who opposed unjust laws. God long ago spoke through the prophet Isaiah: “You are doomed! You make unjust laws that oppress my people. That is how you keep the poor from having their rights and from getting justice. That is how you take the property that belongs to widows and orphans. What will you do when God punishes you? What will you do when he brings disaster on you from a distant country? Where will you run to find help?” (Isaiah 10:1-3, TEV) … In light of this, King saw that violence is systemic when the laws serve only the legislators and those whom they allow to vote; when local legislators pre­serve political and economic power that exceeds their jurisdiction and attempt to block the implementation of federal laws; and when federal legislators ig­nore their obligation to promote the common good. Then the system itself becomes one of the underlying causes of frustration and violence. In view of such misuse of legislative power, King affirmed that any law that upholds seg­regation and degrades human personal­ity is unjust and should be disobeyed. He thus declared: “Laws of this kind are acts of violence rather thari laws. . . . They do not bind in conscience.”

King’s God was a God of justice and mercy, and thus he used every opportunity to call this nation back to the­ principles of justice, liberty, and freedom for all.

As part of his justification for the dis­obedience of unjust laws, King had the example of Augustine, Thomas Aquinas, and Jesus Himself. Augustine had declared that an unjust law is no law at all. Aquinas also declared that an unjust law is a human law that is not based on the eternal, divine law and ought not be obeyed. And Jesus Him­self openly and deliberately disobeyed many of the laws of His day: laws of propriety with women, laws regarding the Sabbath, laws with regard to non­Jews, etc. The honest truth behind civil disobedience for unjust laws was de­clared by Senator Robert Kennedy, after the Watts riot, when he said: “There is no point in telling Negroes to observe the law …. It has almost always been used against them.” King’s God was a God of justice and mercy, and thus he used every opportu­nity to call this nation back to the prin­ciples of justice and liberty and freedom for all, as expressed in the Constitution of the United States. On April 4, 1968, the day he was gunned down by an as­sassin, he was in Memphis, Tennessee, fighting for justice for garbage collec­tors. Like the God whom he worshiped and so faithfully served, he identified with people from all walks of life, lifting them up, giving them a sense of self worth and dignity, even in their labor.

“Whatever your life’s work is,” King declared, “do it well …. If it falls your lot to be a street sweeper, sweep streets like Michelangelo painted pictures, like Shakespeare wrote poetry, like Beetho­ven composed music; sweep streets so well that all the host of heaven and earth will have to pause and say, ‘Here lived a great street sweeper, who swept his job well.”‘ For this, he too gave his life.

The question is “Why King?” The God that he worshiped, personally knew, and served faithfully is the same God that we claim to worship, know, and serve. Then what is the difference? If we worship the same God, why the different responses? Why do we not have more M. L. Kings?

I am not all that sure that all of us see God the same way. Our experiences differ. The optics through which we look out on reality, including divine re­ality, are not all the same. The meaning that we give to what we see and read and hear differs, depending on what values we attempt to safeguard.

The response also may be partial, and not total, as was King’s. King was ready to sacrifice all. Like his Master. Are we? The issue at stake, as King declared, is not one of racial tension, but rather a conflict between justice and injustice.

Because they have sold out to reli­gious respectability, some can no longer serve God. Others, because of their pur­suit of power, are careful of what they say and do so as to not mar their well­thought-out and planned career to the top. Still others want a life of comfort and ease and longevity, and don’t want to be bothered with anything so demanding. What is your position? Are you, like King, willing to risk all-your job, your reputation, your life-for right, whatever that may be in your situation?

The time is right and the world is ea­gerly waiting for a profound and genu­ine demonstration of sisterly/brotherly love among God’s people, so that the world may know that “Black, Brown, White together, we shall overcome someday.”

Manuel Sanabria, Ph.D., a minister and specialist in multicultural relations, resides in Chicago.

Manuel Sanabria, Ph.D., a minister and specialist in multicultural relations, resides in Chicago. 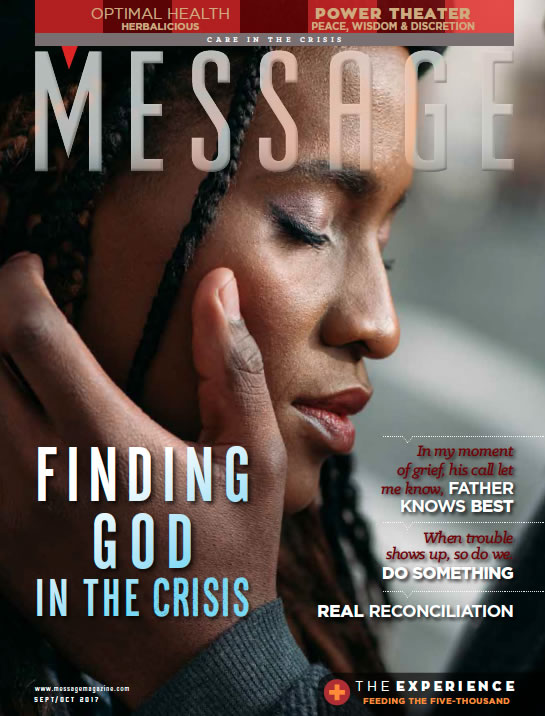